Portland Radio Project and McMenamins are working to bring you the very best in local music – here’s what’s happening this week: Following a long-established Portland tradition, McMenamins Al’s Den is hosting week-long residencies, featuring a variety of fantastic local musicians! The residencies are special because they run for an entire week, from Sunday to Saturday, in the cozy Al’s Den, from 7-10 PM. Each night, the resident invites friends to “rock out” with them on stage, creating a new excitement for each show! Monday night featured The Cabin Project – what an amazing group of powerful female musicians – they made the ceiling shake in a most excellent way! On Saturday night, the concert is followed by a comedy show! Need I mention the enticing food and assortment of beers? Adam Sweeney and his band, The Breaking, visit us this week – bringing their 90’s pop-infulenced band to the Al’s Den Stage. Their music is always evolving, but the current sound is appealing in its originality and familiarity – a combination which tends to inspire as well as entertain. In fact, Adam has found that some of The Breaking’s fans are very young – the music of the 90’s is alive in Portland! Adam is so much fun to chat with! He’s well-spoken, charming, and totally engaging. He tells the story of his musical journey very clearly, as if he has it in mind at all times. He remembers listening to Elvis as a small child, but really being drawn in by Simon and Garfunkel, who were perhaps his first influences. He started out with folk inspiration, but soon was enamoured with the rock sound. He spoke with nostalgia about the difficulty of writing rock lyrics after being a folk songwriter for so many years. 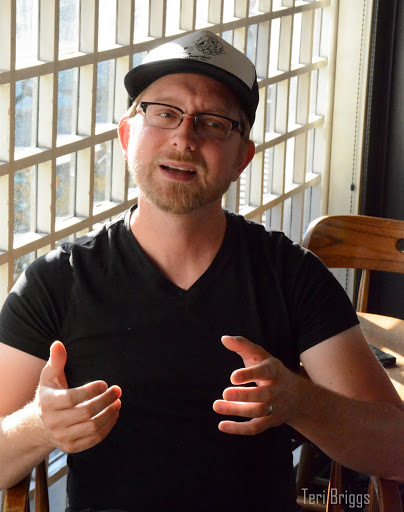 The Breaking has evolved as a band over time – you can view their latest video, “Future Fire,” on Vimeo. Their albums are available on their website. Check it out – the journey lies in the music.