Martha Garkey, identified in a 1940 Oregonian caption as a “star outfielder for the Lind-Pomeroy girls’ softball team who is rated one of the outstanding feminine stars in the northwest.” 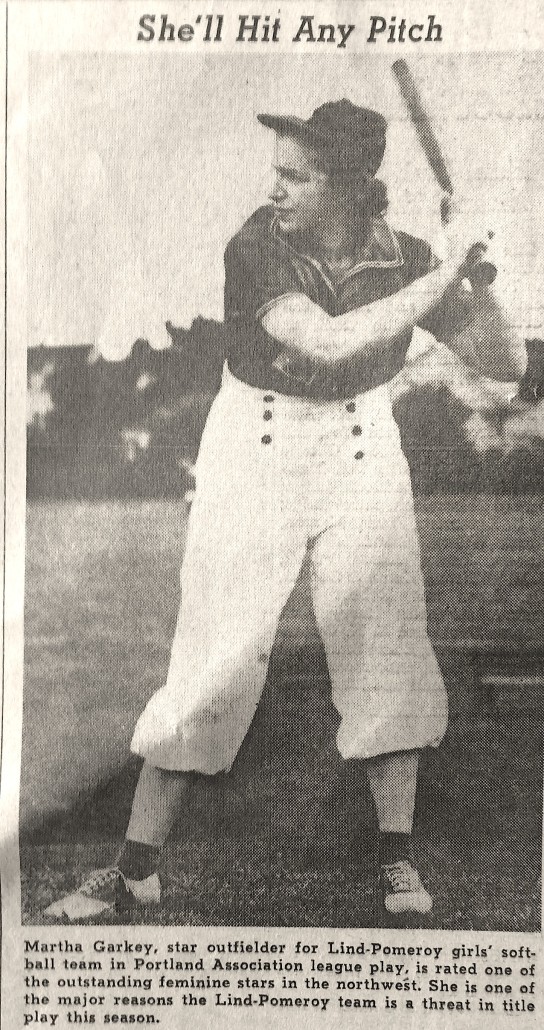 Saddle shoes? What no cleats?

Along with “hitting any pitch,” Miss Garkey (no “Ms.” In the 1940s!) somehow managed to look quite stylish in her hideous uniform. Buttons on the front? What about headfirst slides? Saddle shoes? What no cleats?

Miss Markey’s uni was typical of women’s fashion in the 1940’s.

Despite her unattractive getup, Miss Markey played on a Portland fast pitch softball team that mostly blew away local and national competition during the 1940’s.

Miss Markey’s team was coached by the legendary Erv Lind, a well-known Portland Florist. Mr. Lind sponsored and ran the team for 28 years, leading his girls to two national championships. Their first was in 1944. The second title came 20-years later.

If Lind’s name cracks your bat, it’s probably because you’ve been to or driven by The Erv Lind Stadium in Normandale Park. It’s the home of the Portland State Vikings’ women’s softball team.

Lind’s nearly three-decade coaching record was astonishing: 1113 wins and 324 losses. He was inducted into the Oregon Sports Hall of Fame in 1988. Lind’s teams obviously featured a number of outstanding “feminine stars.” The most notable was Betty Evans-Grayson, who by all accounts, was one of the most feared softball pitchers in the country. Betty Evans-Grayson (holding the ball) poses with three of her teammates. Image courtesy of Adam Chu and Stormy Irwin.

In 1944, Miss Evans-Grayson was the primary reason Lind’s girls won the ASA National Title in Women’s Major Fastpitch. Her dominant performance on the mound, which included four no-hitters, inspired the Oregon Sportswriters and Broadcasters Association to name her “Woman Athlete of the Year.”

Miss Evans-Grayson’s lifetime stats were eye-popping. She compiled a 456-99 won-loss record with 51 no-hitters and three perfect games. She was inducted into the ASA National Softball Hall of Fame in 1959 and the Oregon Sports Hall of Fame in 1982. Miss Evans-Grayson died of breast cancer in 1979. She was just 53 years-old. But, like Erv Lind, her name and legacy live on in Portland softball circles.

Every two years, the Oregon ASA presents the Betty Evans Grayson Memorial awarded to the outstanding 16 and under female player that best exemplifies the work ethic, athleticism, academic achievement and community involvement that epitomized Betty Evans Grayson’s accomplishments during her career. The Oregon Music Hall of Fame
Scroll to top