I arrived at the Blues Festival at the peak of day seeking relief in the shade – a journey that serendipitously dropped me on the shaded dance floor at The Oregonian Front Porch Stage right at the kickoff of The Journey to Memphis Competition finale. The competition is held by the Cascade Blues Association (CBA) at the beginning of June with eleven acts hoping to excel in guidelines set by The Blues Foundation with four finalists performing on July 4th at this year’s  Blues Festival. The winner of the finale gets the opportunity to represent the region and CBA in Memphis, Tennessee at The International Blues Challenge in January of 2015.

First to take the stage was David Pinsky on guitar and Phil Newton playing the harmonica in the middle of belting out raspy blues vocals in what they fittingly call, “front porch blues”. Their sound was certainly the most stripped down and raw of the four competitors, full of true heart and soul.  The duo was followed by last year’s contest winner, Ben Rice and the iLLamatics, a band that plays a “kitchen sink of blues”. As Rice puts it, the group’s unique sound comes from combining rockabilly blues with hints of influence from everything spanning the genres of hip-hop to punk rock music.

The following act, Still Water Vibes, had me groovin’ up a storm beneath the stretched awning with their funky bass lines and kickin’ drum beats. This five-person group is known for the musical intelligence of lead guitarist, Brandon Logan, and it made sense why his playing in combination with Nick Wixom’s vocals was chosen to compete against other equally tremendous musicians.

Finally, the multiple award-winning Rae Gordon took the stage with her band of blues musicians as the final contestant of “The Journey to Memphis”. Gordon’s deep and vibrant voice washed over and won the crowd. I mean, the sheer power of her vocals completely flooded my world, and I certainly wasn’t surprised when the judges finally announced The Rae Gordon Band as the winner of the competition. Their performance truly deserved the honor of representing the blues of the northwest in Memphis. The band won with tracks from their newly acclaimed album, “Blue Lemonade”, and Gordon’s vocals, which have been described by Positively Entertainment and Dining as containing “…equal parts of Janis Joplin’s pain, Aretha Franklin’s soul and Grace Slick’s power”.

I had blisters on both feet by the time the “journey” was over in our little corner of the festival. It was a delight to experience such a range of blues sound, and to be able to witness the passion that each group delivered to the audience and judges. Thank you to the participants, and congratulations to The Rae Gordon Band! 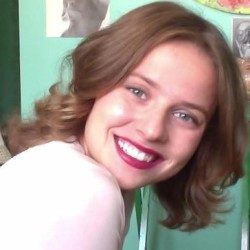