It’s been well over a decade since I stepped foot into a middle school, and I definitely don’t make a habit of waking up before 7 am, but on September 17th I flipped my universe upside down and did both of those things.
A week or two prior, I’d been let in on a special secret that resonated with me in more ways than one. As a representative for Portland Radio Project, I was invited to cover a surprise assembly at Ron Russell Middle School. Portugal. The Man would be performing three live songs, as well as awarding the students with $35,000 worth of musical instruments in conjunction with StubHub and The Mr. Holland’s Opus Foundation as part of StubHub’s NextStage project. They’re on a noble mission to donate one million dollars worth of musical equipment to schools with at-risk musical education programs. Despite being out very late working on a project the night before, there was no way I was going to pass up the opportunity to see Portugal. The Man in such an unusual setting, or to see the looks on the children’s faces when the gifts were revealed to them. When I started The Super Groovy Cosmic Bus Entertainment in 2012, I justified my silly pursuit of music and happiness with the hope that I would not only support artists, but also encourage them to use their art to give back, especially to school music programs. Three years later, my dream was being actualized on a scale I never would have imagined.
It was a gray, rainy morning, one of the first of the season, and as I got out of my cab outside of Ron Russell Middle School, slightly delirious from lack of sleep, I couldn’t help but feel a wave of pleasant nervousness wash over me. It was almost like residual anxiety hanging on from my own days spent in the public education system; that giddy excitement and apprehension we endured each year on the first day of class. Of course I couldn’t remember what door I was supposed to enter, or where I was supposed to check in, and I couldn’t find the email that contained the information, so I took a deep breath, tried to look awake, and approached what could only be a principal greeting students at one of the doors. I smiled, introduced myself, and asked where I should go. The principal shook my hand, returned the smile and sent me in the right direction. It seems principals are a lot less scary to me these days, or maybe this man was just a really great guy. His friendliness was already melting away some of my anxiety, however my excitement was still bubbling just beneath the surface.
I made my way to the gymnasium, checked in with my contact, then found a seat. I sat quietly and gazed around the big bright room, noticing the school mascot on the wall (The Timberwolves), the somewhat sleepy looking guys who seemed to be about my age standing up front (Portugal. The Man), and the strange shaped mass covered by sheets (the instruments for the kids). The children soon filed in, some taking seats with instruments alongside fellow orchestra and band members on the sides of the gymnasium. I asked one of the boys who sat next to me if he knew what this was all about. He seemed tired as he shook his head no. “I think it’s going to be good,” I said, trying to share my enthusiasm without freaking the youngster out or giving away any details.
The delightful man who greeted me at the school entrance had indeed been Principal Andy Long, and as he took the podium to address the students, I could tell he felt as excited as I did about the event. He was followed by Band Director Tawnya Garcia and Orchestra Director Tammy Culp, who shared quotes from the students about what being able to play music means to them. Ms. Garcia and Ms. Culp each invited two students to bravely take turns reading their personal feelings about why music is important in their lives, and I must admit, it all brought me to tears.
The assembly continued, and even though they’d only had two days to rehearse,
the Ron Russell advanced Orchestra and Band put on solid performances. By this time, I was absolutely floating on the warmth and good vibes of the music and the children’s words, but the magic wasn’t over. StubHub representative Jessica Erskine stood at the podium and explained how the online ticketing service is donating $1 million dollars of musical instruments to at-risk public schools. She then had a group of volunteers remove the sheets from the risers to reveal a beautiful shiny mass of new instruments including violins, french horns, trumpets, and more. The gym erupted with applause and I could feel my cheeks twitching with an enormous smile, which I’m pretty sure was not unlike the smiles I was seeing on faces all around the room. After the audience quieted, StubHub’s Jessica Erskine announced that Portugal. The Man was in the building and would be playing music for us. Cheers and applause once again echoed throughout the gymnasium. The band played a great three song set and then expressed how much it meant to them to be able to give back to the community with StubHub and The Mr. Holland’s Opus Foundation, because once upon a time they too had been public school band students. Afterwards, I snapped some shots of Portugal. The Man with my toy bus, but didn’t stick around to interview anyone because I’d paid close attention, taken plenty of video clips to reference, and I felt like I might come across as insane. I was going on hardly any sleep and my head was buzzing with appreciation, amusement and a little bit of disbelief, so I snuck out of the gym, a smile still plastered across my face, hopped in a cab, and proceeded to relay the morning’s events to my cab driver. It just so happens he’d been a musician all his life, and I could tell he was getting a kick out of my excitement. In fact, he said the story made his day. Thank you so much to Portugal. The Man, StubHub, The Mr. Holland’s Opus Foundation, and everyone at Ron Russell Middle School. They not only gave those young people an incredible gift, but also fulfilled a personal dream for me: being able to support artists who use their art to give back to music education in public schools. 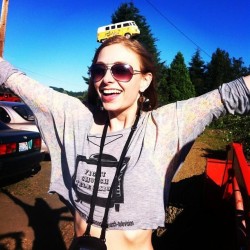 Heather Hanson
Follow The Super Groovy Cosmic Bus Entertainment and tune in to The Bus Stop every Wednesday on Portland Radio Project from noon to 4 PM. Wesley Britt on The Bus Stop Nu Shooz on The Bus Stop No Plan B for Tess Vigeland
Scroll to top