One of the hardest-touring and most versatile singer/songwriters on the planet spent some time with PRP recently. We caught up with the charismatic performer before his show at The Aladdin on March 6, 2014.

A Few Highlights of Our Interview

Prior to his packed-house performance at The Aladdin on Thursday night, Martin Sexton said that making a career out of art is “sort of like defying gravity.”

Sexton wasn’t weightless when he strolled on stage, but it was apparent to the adoring crowd that he’s an artist who truly loves his work. During a mid-show guitar-tune pause, when passionate fans began shouting requests, Sexton looked up, smiled and said, “if you would have told me that I’d be in a beautiful hall with people screaming the titles of my songs…” He didn’t finish the thought. He left that to one of his unique guitar riffs, which led into one of his earliest compositions, “In the Journey,” a song he first recorded in a friend’s attic in 1990.

The evening began with a Sexton-fied, away-from-the microphone rendition of “America the Beautiful.” From there, he opened up his vast 20-plus year catalogue, moving effortlessly from “By the Grace of God” to “Happy” to “Hallelujah.” Then, it was time for the artist to pay homage to a group of socially conscious torchbearers who came before, The Buffalo Springfield. Encouraging a hootenanny-style sing along to the classic “For What It’s Worth,” Sexton told the crowd, “We’re living in the new sixties, and it’s time to remember why we’re not different.” Sexton’s performance and the enthusiastic audience response provided one of the truly inspiring moments of the evening.

“Can’t Stop Thinkin’ Bout You,” one of Sexton’s signature tunes from his 1996 “Black Sheep” album, was delivered with such smoky power and passion – Sexton’s unique voice seemed to be rising directly from his obviously well-developed soul. “Diner,” another “Black Sheep” selection, had Sexton singing the praises of being a “foodie” on the road. Turns out, one of his favorite Portland restaurants is Jake’s Seafood, where he spent part of his day in PDX feasting on Dungeness crab.

The second half of the show featured sterling renditions of Sexton’s “Animal,” “Glory Bound” (WOW!) “Over My Head,” “In the Journey,” “My Faith is Gone,” and “Black Sheep.” Another audience participation highlight came near the end of his 90-minute set, when Sexton launched into the Beatles’ classic “With a Little Help from My Friends.”

All in all, it was a memorable night from a prolific, thoughtful and soulful singer/songwriter, who’s joyfully carrying on an important American tradition.

“There Go I” Exclusive PRP Performance Martin on the Aladdin Theater Marquee 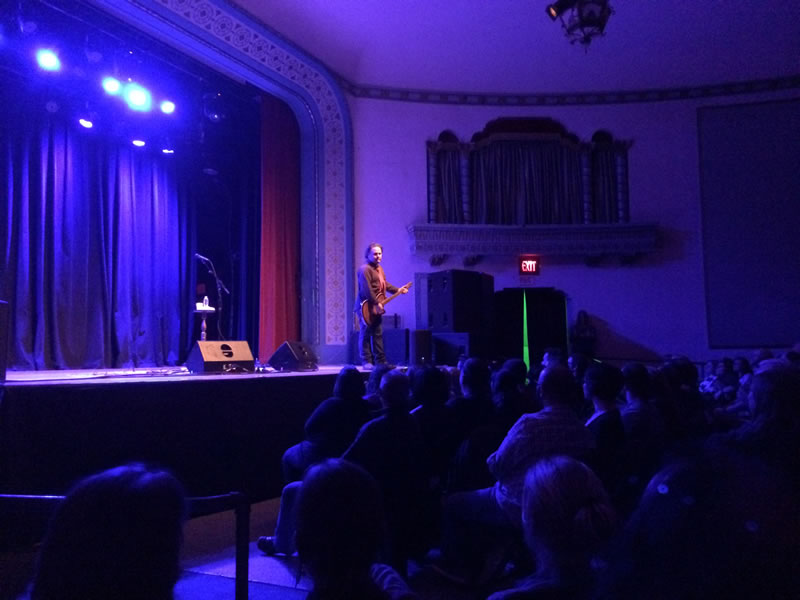 Martin Sexton on stage at the Aladdin Theater A New Explanation for Stonehenge