Moorea Masa paid a visit to Luke and Teri Wednesday night at Portland Radio Project. Adorning many a performance stage with one of her favorites, the sunflower, it is a perfect representation of the presence this young woman extends to the world she travels in. Like the sunflower, big and beautiful, with its happy yellow petals, commanding one’s attention, so too, does Moorea command your attention. When she flashes that big, beautiful smile, and you hear the sound of her laughter, you are instantly drawn to her like bees to the hive, yet the nectar is, that voice. Her voice, it bubbled forth before she could even speak, unable to be contained as she belted it out wherever she might be. She gives thanks to her parents for letting their child sing uninhibitedly, loudly even, and credits that for helping her develop it to what it is today. As a vocal teacher, she sees the difficulty people face, when learning how to sing, in letting go, putting it all out there, belting it out, and is grateful she wasn’t told to “be quiet,” but instead, was allowed to sing freely and loudly. The first part of the show was spent listening to her musical influences. One of her earliest memories is of her Mom listening to Jill Scott, so frequently that Moorea counts this artist as one of her first influences. Her playlist included many of the greats; Nina Simone, Etta James, Billie Holiday, Aretha Franklin, to more currently; Lianne La Havas, Moses Sumney, D’Angelo, and in tribute to the time she lived in Spain, Las Migas. She even threw in Destiny’s Child for the impact this band had on that time period in her youth.

The second hour focused on Moorea’s original material from her latest album, “Oh, Mother.” This album is a labor of love, and in tribute to a woman who was a mother figure to Moorea. From the beautiful artwork, to the release party set in the magical setting of a SE Portland loft, this album is a work of art. Be sure and watch the official music video for the title track, https://www.youtube.com/watch?v=AKai37E5WYk.

Joining Moorea to perform live were Mel Guérison and Abbey Hickman. These two women also have their own music projects but have recently collaborated with Moorea to be “The Mood” part of the band. The trio only has two rehearsals and a performance under their belt, but you would never know it, solid musicians they are. They performed, “Oh Mother;” an Emily King cover, “Distance;” “Five Birds;” and “The Garden Song.” Using only their vocals and Moorea on guitar, their harmonies shine, showcasing the utter beauty of the voice! 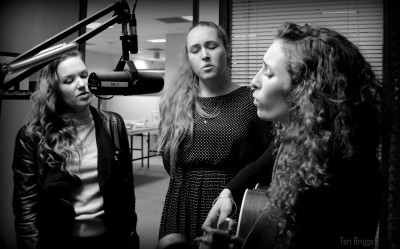 Moorea’s career is ever-evolving. She has fronted a band (The Ruby Pines), has her solo project, Moorea and The Mood, sang back up with Ural Thomas & the Pain, and lent backing vocals to Allen Stone, NU SHOOZ Music, The Decemberists, John Craigie, and EL VY which included a performance on The Conan O’Brien Show. She recently toured with Haley Johnsen, and just announced that she will open a few shows (Portland, Seattle, & San Diego) for one of her musical influences, Emily King.

Moorea’s next Portland show will be Monday, January 18th, at the Crystal Ballroom. She will open for The Mowgli’s as part of the MLK Day Celebration honoring Dr. King and volunteerism. This all-ages show is free, doors at 7, music at 8, http://www.crystalballroompdx.com/events/148712-MLK-Day-Concert.

You can find Moorea at: www.mooreamasa.com