Dope Shows, Dirt Cheap
@ the PRP Studios
5516 SE Foster Road, Portland
Friday, June 30th
3 pm | $6
All Ages, must be 21+ for beer on tap
You can catch Kris Von Whatever’s show every Thursday, 10 am – Noon, only on Portland Radio Project. You can catch Fresh Spins with Jen Em every Friday, 10 am – noon on PRP. Luke is the voice of Sounds of PDX on PRP. Catch Sounds of PDX every Tuesday night from 7-9 pm, and the SPDX Listening Party every Thursday from 1-3 pm! 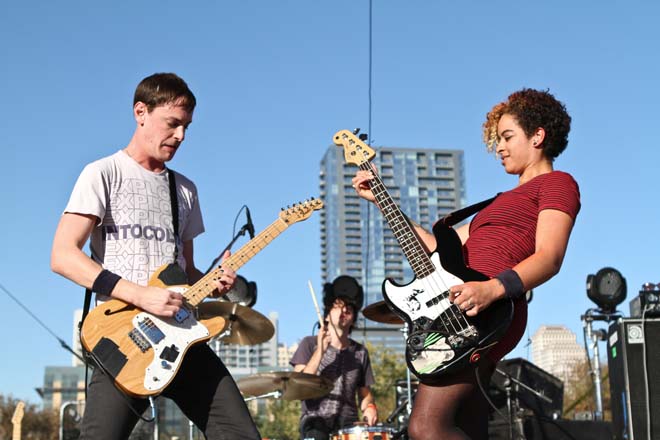 This is from Willamette Week:
[POWER-PUNK LEGENDS] The Thermals are remarkably consistent: There’s nary a misstep in their entire discography, their live show works as well in a cavernous hall as a tiny bar, they have a seemingly inexhaustible supply of compact anthems, and they keep a release schedule that slakes fans’ thirst at regular intervals. So, it’s a little too easy to assume that the Thermals will always be here and that they’ll always be great— but they won’t. And we won’t. Let this be a reminder: The Thermals are a truly special band, and one of life’s little gifts is that we get to share a stretch of time with them. Appreciate it while you can. CHRIS STAMM.

A night of original music: The afternooners and The Colin Trio plus touring band Thorcraft Cobra!

The afternooners: Paul Simon meets Thundercat for this blend of classic song writing mixed with lush jazz harmonies.
Thorcraft Cobra: Together Billy Zimmer (Brown Eyed Susans) and Tammy Glover (Sparks) combine a knack for concise pop songwriting, a gift for crafting immediately engaging melody, and impeccable taste in rock and roll sonics into something that is both fresh and undeniable.
The Colin Trio: A feisty blend of blues, jazz, and rock written by songwriter Colin Hogan, and brought to life with Brian Link and Matt Ramsdell.

Teri says, “What, there’s music going on other than at the Waterfront?” This year, the Waterfront Blues Festival celebrates 30 years of providing thousands of Blues loving fans with 5 days of non-stop music while raising thousands of dollars for the Oregon Food Bank. Starting Friday, the festival runs through the Fourth of July with a fireworks finale that is an annual tradition for many.

Over 150 National and Local acts will perform on four stages along the Waterfront, as well as off-site at the Portland Marriott, aboard the DME Blues Cruises, and at Hotel Rose for the Brunch, Happy Hour, and After Hours shows. You can find the full schedule here.
And you can find Teri all five days in the photographer’s pit, toting her camera and polka-dotted bike helmet. And Now a Word from Our Sponsors